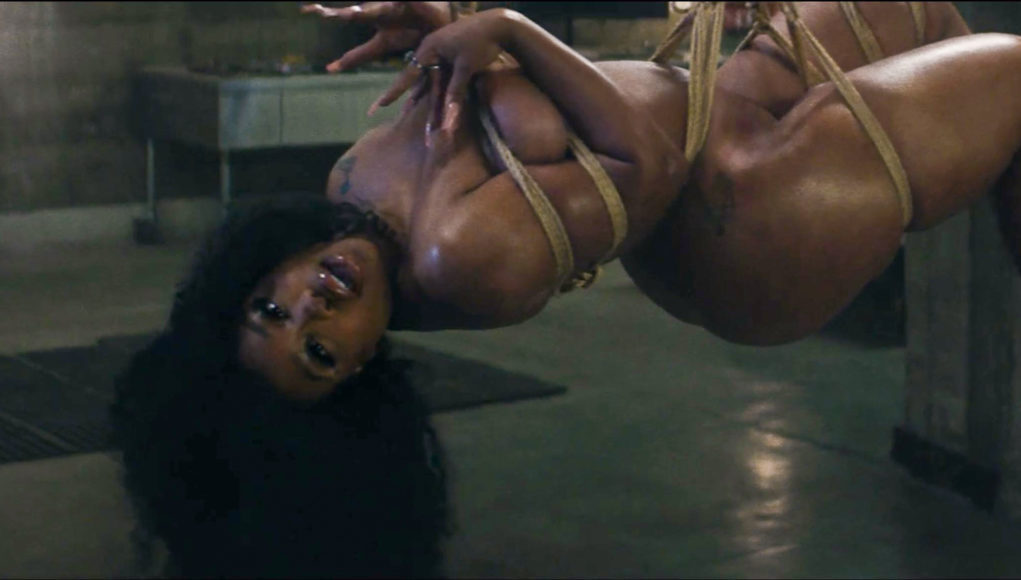 Every so often I get the opportunity to tie for a video or film. As I often talk about in classes, it can be a complicated process because your job (and it is a job) is not to tie any way you like, it is to bring someone else’s vision to life. Unusually that is a photographer or director. In this case it was different. The person who wanted the rope bondage scene in the video was the artist herself, SZA.

I was given a photo that she liked and told that was what she wanted. To replicate that tie as closely as possible.

One of the toughest parts about a job like this is managing some of the relationships and expectations. I was told at the beginning that the on set professional riggers would handle the actual suspension, using a harness and wires and that the rope would be overlayed and the harness and wires would be removed in post.

My first task was to convince them that it would be a lot easier just to do the suspension with rope. It took some discussion and assurances about safety and comfort, but eventually the team signed off on the idea.

Second up was the rope itself. Another round of debates and I once again managed to convince them that using jute would not only make it look better and photograph, well, but that it also feel better for this particular tie.

Once we got on set, I was asked to tie a stand-in so they could get some pictures of the tie and get final approval from SZA. The tie came together quickly and we did a few test shots and sent them off to the trailer for review.

The stand in was delightful to work with.

First time being tied, so that always presents some challenges. But she took to the tie well and enjoyed it.

Once we had the photos done, we hung out, waiting for approval. I entertained a lot of questions about what it is that I do, how I got started, where I learned, etc. Always a great opportunity for shibari education!

We must have passed the test, because after a short wait, the AD announced SZA was on the way. The set was closed and after some brief introductions, we got to the main event.

It was also her first time being tied and she was nervous, asking if it was going to be painful. I told her to let me know if it was and we could always make adjustments. As it turns out, she endured it like a pro, for something like a dozen takes.

I watched each take carefully, making sure things looked good and that SZA was safe.

When the shoot was complete, I asked if I could take a picture to memorialize the event and she smiled and enthusiastically told me that would be fine.

It was a great experience all around and I really love how the video came out.

Give the Gift of Rope!

This site uses Akismet to reduce spam. Learn how your comment data is processed.

Founded in 2011, the LA Rope Dojo is dedicated to providing safe and traditional training in the Japanese art of kinbaku. We offer regular classes, workshops, intensives, and events to help build the LA rope and kinbaku community. We have brought Grandmaster Yukimura Haruki and rope master Akira Naka to Los Angeles to offer seminars and workshops.
Contact us: [email protected]